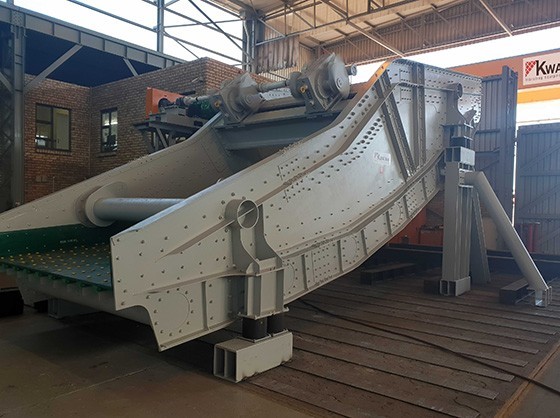 Numerical simulation research that modelled the behaviour of particles on a conventional banana screen has been leveraged by local vibration screen specialist Kwatani to make fundamental improvements in the design.

So important were Kwatani’s adaptations that they were able to double the throughput of a competitors problematic dewatering screen on a customers mine, where excessive water carry-over was limiting production potential.

According to Kwatani chief operating officer Kenny Mayhew-Ridgers, the company’s depth of mechanical and metallurgical expertise underpins its ability to apply what it learns from research and field testing.

This specific research, which was done by Australia’s Commonwealth Scientific and Industrial Research Organisation (CSIRO) and the University of Queensland, highlighted that the traditional feed-end slopes of banana screens were generally too steep, says Mayhew-Ridgers. At around 34°, these slopes create material velocity in excess of 3 m/s too high for efficient screening.

He considers that a more suitable slope at the feed end is 25°, leading into five or six deck slopes in the screen and ending with a discharge slope of just 5° or even 0°. This would ensure that the material velocity was less than 0,5 m/s at the discharge end. The drive angle, operating speed and stroke are also significant factors, he says.

Our analysis allowed us to address a challenge that a customer was experiencing with their degrit screens, he says.

Water carry-over from the screen to the conveyor belt was limiting throughput to only 250 t/h, and the mine needed more than that.

Kwatani’s changed the screen feed-end slopes and incorporated a long discharge-end decline slope of 3°. The drive angle was also increased to 50° to improve the dewatering performance of the screen. These adaptations were possible within the constraints of existing chute work, motor base position and support structure. The size of the screen measuring 3,66 m wide meant that a considerable load needed to be supported on the screen deck, so circular hollow sections provided improved strength in place of the H-profile deck beams usually employed.

The modifications were successful, he says. The mines plant manager was able to confirm that the feed rate had been increased to 500 t/h with very little water carry-over, and this performance was consistently maintained.

The application of the new design was outlined in a peer-reviewed paper by Mayhew-Ridgers and Kwatani director Derrick Alston, which was presented at an international mineral processing conference.

Our aim is always to show you the content you are really interested in. For this we use cookies. In this way we can personalize our website and by analysing your use of our site, our website team understand which parts of our site are most relevant to you. By choosing “accept all cookies” you agree to our use of cookies. Of course you can change and customize your settings at any time.
Cookie SettingsAccept All
Manage consent

This website uses cookies to improve your experience while you navigate through the website. Out of these, the cookies that are categorized as necessary are stored on your browser as they are essential for the working of basic functionalities of the website. We also use third-party cookies that help us analyze and understand how you use this website. These cookies will be stored in your browser only with your consent. You also have the option to opt-out of these cookies. But opting out of some of these cookies may affect your browsing experience.
Necessary Always Enabled
Necessary cookies are absolutely essential for the website to function properly. These cookies ensure basic functionalities and security features of the website, anonymously.
Functional
Functional cookies help to perform certain functionalities like sharing the content of the website on social media platforms, collect feedbacks, and other third-party features.
Performance
Performance cookies are used to understand and analyze the key performance indexes of the website which helps in delivering a better user experience for the visitors.
Analytics
Analytical cookies are used to understand how visitors interact with the website. These cookies help provide information on metrics the number of visitors, bounce rate, traffic source, etc.
Advertisement
Advertisement cookies are used to provide visitors with relevant ads and marketing campaigns. These cookies track visitors across websites and collect information to provide customized ads.
Others
Other uncategorized cookies are those that are being analyzed and have not been classified into a category as yet.
SAVE & ACCEPT